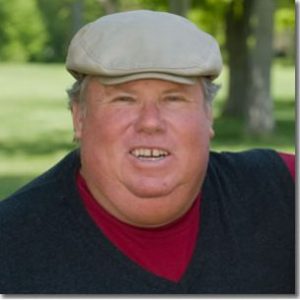 PB Dye took his first golf lesson and fell in love with the game about the same time most kids were barely out of rubber pants. That was back in 1959 when PB was four years old. Six decades later, following in his father’s footsteps, he has turned into one of the outstanding golf course architects with over 50 courses to his name. Several of PB’s courses are co-designs with his Dad, legendary golf course designer Pete Dye. Actually, PB is a third generation design/builder. “My grandfather Paul “Pink” Dye designed and built a nine hole course in Urbana, Ohio in 1922 where my Dad learned to love the game.”

PB’s first co-designs with his dad were Long Cove Club of Hilton Head Island which has been in Golf Digest America’s 100 Greatest Golf Courses reaching Second 10 in the same year and The Honors Course in Ooltewah, Tennessee which in 1985 Golf Digest voted “The Best New Course of the Year.” PB has an identity all his own, but like his father’s creations, his courses often include railroad ties, pot bunkers, and island greens. Alice Dye says, “Designing a golf course is like painting. You don’t want someone else adding brush strokes. We might discuss ideas, but each of us does our own thing.” Bloodlines aside, Pete Dye offers a ringing endorsement of his youngest son’s skills. “PB is one of the most talented designers I know,” he says. “I’m not just saying that because I am his dad either. I’ve heard a number of professionals in the design field say the same thing. His creation instincts are superior to mine when I first began my career.”

Like his dad, PB is a hands on designer, leaving his imprint on every blade of grass on a course. What separates PB from other architects is his ability to climb on a bulldozer and shape a golf hole from tee to green. At PB’s signature course, The PB Dye Club, he spent over 120 days on site doing much of the shaping himself along with his crew. Most of PB’s courses are located in the Eastern part of the United States. More recently, he has designed courses in the Caribbean, Central America, South America, France, and Italy, allowing him to utilize his bilingual skills. PB’s personal favorite course is the Urbana Country Club. His grandfather, “Pink” Dye, started the original nine in 1922 on farm ground owned by his wife’s family. PB’s grandmother, “Ma” Dye, asked him to build the second nine, seventy years later. “Go to Urbana and build it” (referring to the new nine of Urbana Country Club). At that point, it became a personal mission, a real grass roots project. Another unique nine of PB’s designs is the exclusive Fisher Island Club, promised to be the best nine hole course in America. There he created a manicured look “similar to Augusta National with tropical vegetation.” PB says, “There is nothing short about it” referring to the ocean winds that prevail over the 3,105 yard layout. The Fisher Island Club was the home of the Merrill Lynch Senior Shoot Out Championship in its opening year.

PB attended the University of Tampa and was a big part of their golf team. He qualified for both the U.S. Amateur and British Amateur in his senior year. In 1986, PB and his mother Alice Dye were elected members of the ASGCA, making his mom the first female member. In 1998, the National Golf Foundation and The Metropolitan Golf Writers Association chose to name the Dyes, “National Golf Family of the Year.” Grinning PB claims, “My whole family is crazy. I just happen to like our insanity.”