FROM HUMBLE BEGINNINGS A GREAT COURSE AND CLUB DID SPRING – If it was not for an untimely automobile breakdown some ninety-five years ago, there would probably be no such thing as a Dye golf course.

Paul F. (“Pink”) Dye, father to Pete Dye, had never played golf before. Pinkie’s vehicle broke down on the old Federal Highway No. 40, when he was returning from Washington, D.C. to his hometown of Urbana, Ohio. The breakdown occurred in Farmington, Pennsylvania, near a historic hotel called the Summit Inn Resort. He stayed overnight while repairs were made, hit some golf balls, and played nine holes for the first time. He was hooked.

Mrs. Paul Dye (wife to Pink) indicated her mother and aunt provided the land and husband “Pink” designed the course. She recalled how she and Pink used to ride their Model “T” up and down the hills on those acres – plotting the course.

“UCC had the first bent grass greens in the country. Scott Seeds was experimenting with bent grass so “Pink” and George McConnell talked them into using it on the Urbana greens.

As the course developed (it was a six hole course until 1923), membership began to grow but there was a problem reaching the club on dirt roads that were often muddy or dusty. “In the 30’s, “Pink” and some of the men contacted Ohio Governor Martin Davey, who made it possible to get the road paved from Urbana to Slabtown, just east of the club. At the grocery store in Slabtown, the paved road quit.” Mrs. Dye explained “Now that was progress!!”

The small cottage on the property had one big room but no cooking facilities. The members all brought their own food in baskets for picnics. Long picnic tables in the yard were used. Little by little the cottage was improved and the club house was built. Mrs. Dye remembers that one tournament was won by George McCrery and the first prize was a watermelon.

Small boxes of sand were found on each tee. At that time there were no wooden tees so you would tee your ball up on a pyramid of sand. The box had a container with water and one with sand – you would wet the ball, put it in the sand, tee it up on sand and wash it off, as well”

What vision and raw nerve Paul F. (“Pink”) Dye and his friends had to understand such a grand endeavor.

On August 21, 1991, James B. Johnson distributed a business plan to purchase additional land to expand the course with the second nine holes. A golf course routing of the new nine was needed. Paul Burke Dye (P.B.), son of Pete Dye, internationally famous golf course architect, and grandson of the first nine’s designer and builder Paul F. Dye, was asked by his grandmother, Elizabeth Johnson Dye, Paul (Pink’s) widow, to complete the course that his grandfather had begun seventy years earlier.

In the traditional style, P. B. routed the new nine on his cousin Andy’s dining room table with just fifty-five minutes to catch a plane to South Carolina. At the September 1991 board meeting, the purchase of the land for the additional nine holes was unanimously approved with P.B.’s design.

P. B. returned in January with a 953 track loader and by the autumn of 1992 had begged, borrowed, and stolen enough equipment and people to render the land into nine more holes that will, as J.B.Johnson suggested, “Keep UCC the Club of Choice.”

Officially, clearing the land began on February 18, 1992, with P.B. and crew in charge. P.B.’s commitment generated a spirit of voluntarism. Seventy-five percent of the new nine had been planted, six tees and five greens had been roughed in and the 952 caterpillar was on site for most of May, 1992. P B and crew kept the “pedal to the metal” and all went well. P.B. also enlarged and redesigned the original driving range while working on the back nine.

And the rest, as they say, is history. On August 27,1993 a dedication ceremony was held at the rock garden, designed by PB. Dye and planted by Anne Doss, in memory of Paul F. Dye and Elizabeth Dye. The new nine was officially opened to play…and the golfing tradition at UCC continues on eighteen holes.

The Urbana Country Club has played host to many of golf’s legendary heroes. Gene Sarazen, Tommy Armour, Walter Hagen, Sam Snead, and a young Jack Nicklaus… all have played the course – one members often take for granted.

The Tradition continues from the seeds planted at the Dye Original – Urbana Country Club. 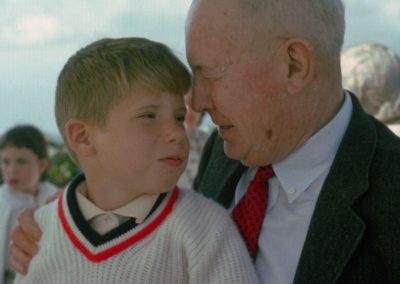 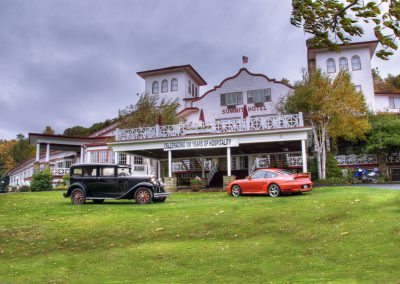 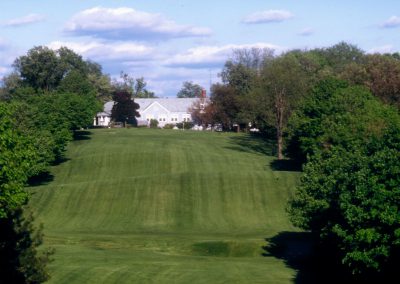 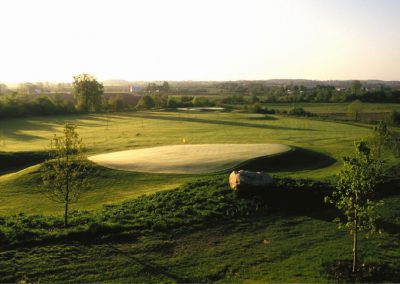 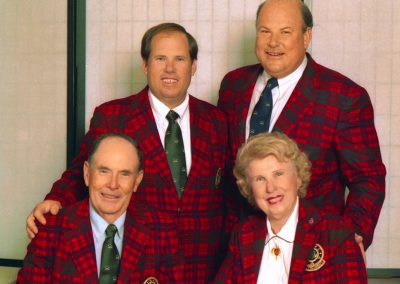